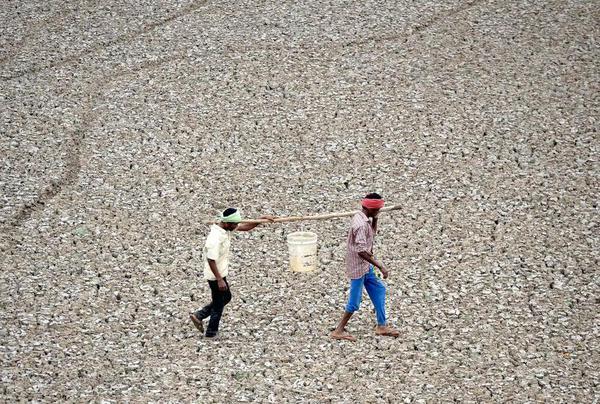 As a major Indian city runs out of water, 9 million people pray for rain

As the sun rises, so, too, does the heat, heading toward a high of 109 degrees. Finally, at 8 a.m., water spills from the pump. But the flow is erratic, requiring a 10-minute wait before the next vessel can be filled. A sharp argument erupts between neighbors over whose turn is next. Last month, a woman in the area was stabbed when a fight over water turned violent. The situation is “mental torture,” said Vani, 44, hoisting a neon-colored plastic pot full of water to her waist before starting o 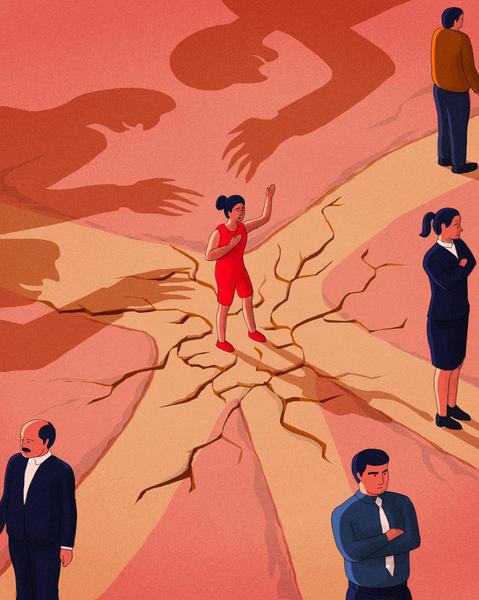 The Athlete’s Tales - Is SAI fixing its sexual harassment policies?

The Athlete’s Tales - Is SAI fixing its sexual harassment policies? 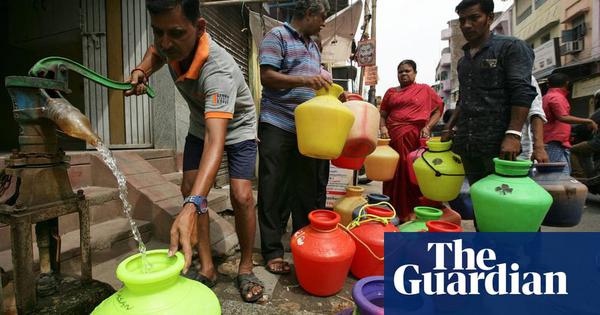 'Our whole life is disrupted': hope dries up as Chennai battles historic drought

Travelling through Chennai, it is not hard to find a row of empty pots dotting the pavements. Deep in the slums of Mylai, a long line collects behind a bright yellow tanker. The driver fills the public tank while people wait their turn to fill four pots of water. Any more than four is considered risky and can provoke clashes. Geetha is in no mood for a fight and wants to stick to her quota. The 43-year-old stands at a distance from the crowd after filling her pots, undeterred by her youngest da 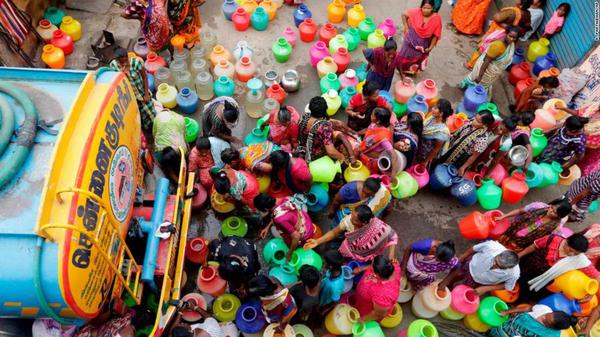 'I'm scared for my daughter': Life in India's first city that's almost out of water

Chennai, India (CNN) As Manjula Sridhar went into the operation theater of a maternity ward in Chennai, the capital of the southern Indian state of Tamil Nadu , her mother began arguing with the doctor over a water shortage that threatened to delay the delivery. Cradling her little girl, Sridhar recalls the doctor saying that they would have to wait for a water tanker to arrive because all the water in Egmore's Government Hospital for Women and Children had run out "We have a problem at home a

He’d skipped dinner that night, his father remembers, and had been withdrawn: “I’ll have breakfast tomorrow.” He didn’t. The villagers found Chakkali Palle Raju hanging from a tamarind tree, three days after he was told he’d failed his economics and civics school examinations—one of at least 23 Telangana schoolchildren who committed suicide after receiving their grades. Protests against the Telangana State Board of Intermediate Education and examination contractor Globarena have been ranging ac 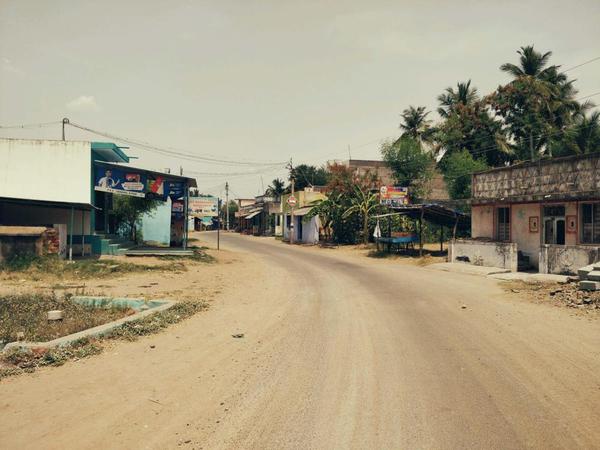 Chennai: “Go away,” screams Neela, an old woman seated on a pavement in Athimoor village in Polur, 25 kilometres from Tiruvannamalai district. The village is deserted, the shops shuttered, and the houses locked. A week ago, a 65 year-old tourist Rukmini was lynched by a 200-strong mob after she was found distributing chocolates to children in the area. Men from Athimoor and surrounding villages suspected her to be a child trafficker. Their source of information –WhatsApp. “She was giving them Ma 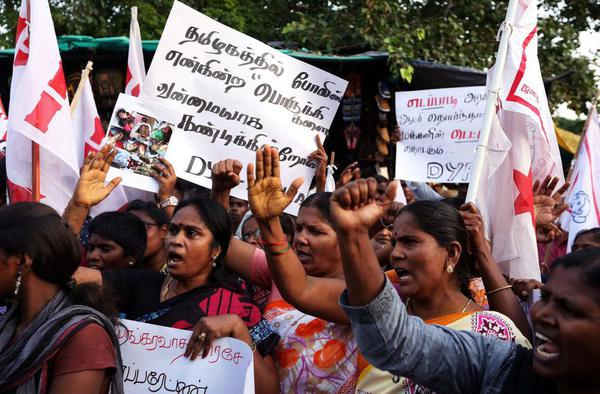 Sterlite Workers: 'Anil Agarwal Can't Undo Our Pain. Where Do We Go From Here?'

Thoothukudi: On the outskirts of this coastal city in Tamil Nadu, 34-year-old Karthiban has gone into a deep depression. Sitting crouched on a stone slab, frantically chewing fingernails on his left hand, he says: “I tried. I tried to live. But I needed to die, and dying is better than living without my right hand”. Karthiban got injured in 2017 while working at Sterlite’s copper plant here. After working for four years in the plant, his medical expenses were covered by ESI (Employees’ State In 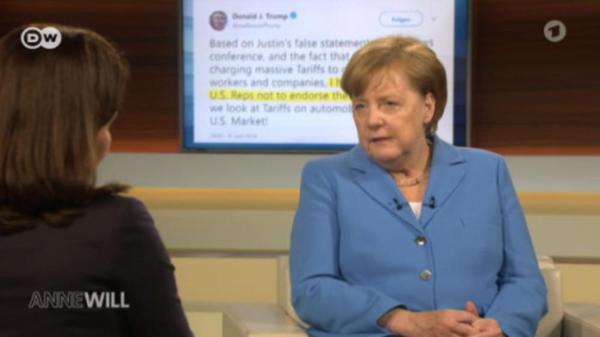 After the Sterlite Copper factory in India's southern Tamil Nadu state was permanently shut down by state regulators Monday following a series of deadly protests, activists experienced a range of emotions. "We have won!" said Fathima Babu, a feisty activist who has been involved with the movement against the Sterlite Copper factory for over 23 years. The operators of the factory have been accused for many years of polluting the local environment in the port town of Thoothukudi. Tamil Nadu's st 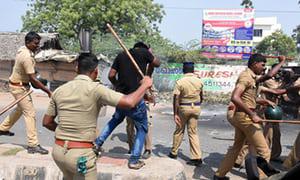 'The martyrs did it': bloody end to Indian copper plant saga

David and Goliath are familiar characters in Tuticorin. The south Indian city, home to one of the country’s oldest Christian communities, has been fighting a giant. Days after 13 protesters were fatally gunned down by police, including a teenage girl, activists won a key victory over one of the world’s largest mining companies. For more than two decades, Sterlite, a subsidiary of the London-listed Vedanta Resources, has been operating a copper smelter on the outskirts of the city. Over the same 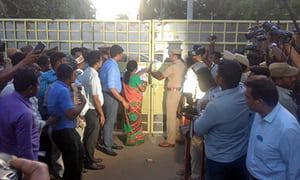 A British-owned copper smelting plant in the southern Indian state of Tamil Nadu that has been blamed for unnaturally high cancer rates in surrounding villages has closed, days after 13 people were killed by police during protests against the facility. The Tamil Nadu chief minister, Edappadi K Palaniswami, has ordered environmental authorities to “seal the unit and close the plant permanently”, after a 22-year campaign by environmentalists and residents against the site, owned by London-based V 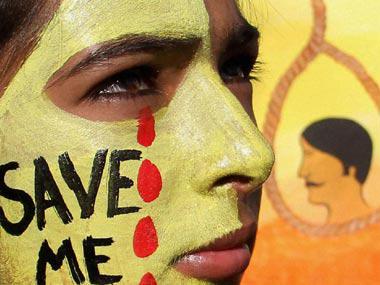 Post a recent incident in Chennai where a teenager had a knife to her throat after a stalker had noted her every movement, the deputy commissioners of various localities in Chennai were alerted. Some were pursuing the case, but some were left dumbfounded on how to handle a case of stalking. After discussing the incident, a deputy commissioner hesitated before making a point. "If we had some funding and support from the Nirbhaya Fund, we would probably be at least better equipped to put into plac 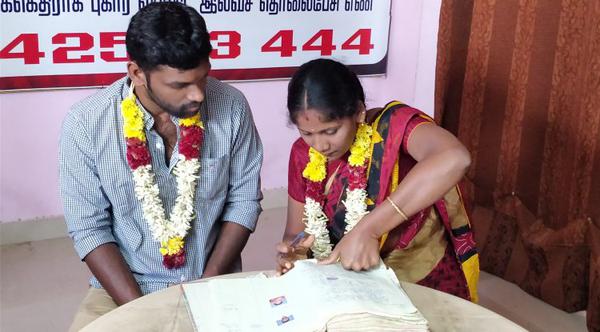 Tiravur, Tamil Nadu: “I could kill someone,” said Janaki Chinarasu in early June at her home in Tiruvarur, protecting her forehead from the heat with her hands askew. “It’s like the sun god has conspired with the rain god to punish us.” Chinarasu is a frail, strong-witted woman with a five-year-old on her lap and a husband hovering around, looking for a washcloth to go out to work. She fantasised about her life as a farmer’s wife in the past before the unforgiving drought struck in the summer o 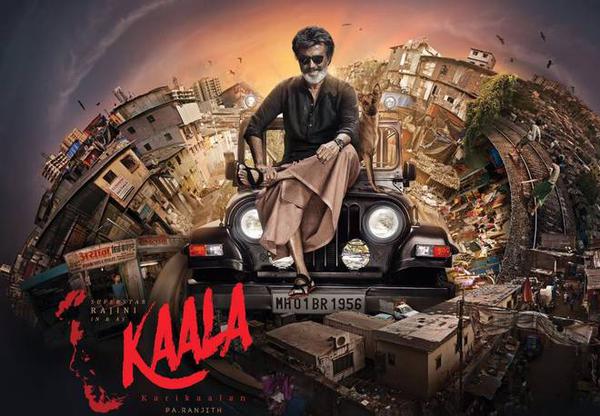 In Rajinikanth’s Kaala, Colour Is Political

The Superstar’s latest film’s teaser is all about the colour black and its resonance in Tamil politics is historic In 1944, EV Ramasamy Naicker, who came to be better known as ‘Periyar’ (the Elder), was in the midst of mental churn. He had already dropped his caste surname of ‘Naicker’ in 1929 and had become an avowed atheist, claiming that religion was the root of all evil. It was a time when Tamil Nadu was getting steeped into his Dravidian movement – Self Respect (Suyamariyadhai) and Social 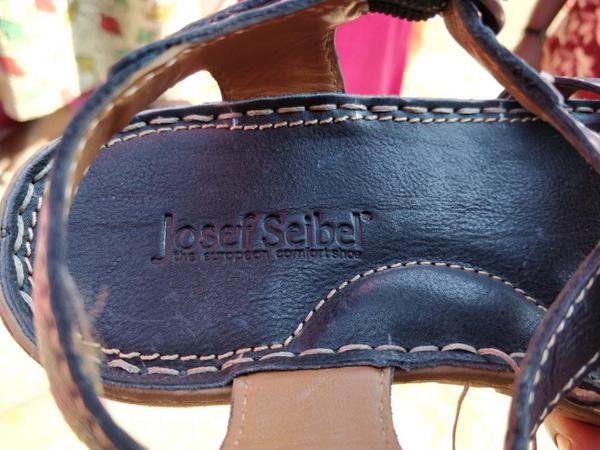 The Invisible Women Of Vellore

Off the books and without benefits – a peek into the lives of homeworkers in the leather industry of Tamil Nadu Setting down her needle and thread on the floor with her swollen fingers, 21-year-old Savitha Sagayam, of Mettupalayam village in Vellore has just begun her work for the day after sending her children to school. MR Rajendran, a well-built man in a pink shirt, carries a large black bag on his shoulder, dropping it near the petite Savitha. He towers over her while she pulls out a leath

Students Left In The Lurch As Universities Violate Norms

In the wake of the arrest of Bharathiar University Vice Chancellor on Saturday, The Lede delves into the irregularities plaguing Tamil Nadu’s Universities Lokesh Kumar’s voice chokes up a little, as he recounts his experience with Tamil Nadu’s Alagappa University as being hellish and regrettable. 35 years old and the sole breadwinner of his family, he has no job. Despite having completed his MBA in 2012 via Distance Education, his marksheets have not arrived. Since then, Lokesh has made repeate 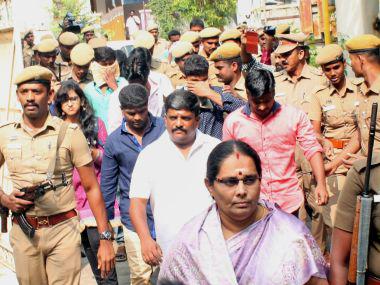 After a heady day in court, Kausalya was surrounded by mikes and questions in her Udumalaipet home. Wearing a black polo T-shirt, she stepped out buoyantly, with strength in her voice and a swagger. "Today," she began, "today, my faith in the justice system has been restored." 12 December, 2017, will be a monumental day in the history of every honour killing judgment ever heard in the country. On 13 March 2016, a grainy CCTV footage emerged from a shop in Udumalaipet, a small town in Tirupur di 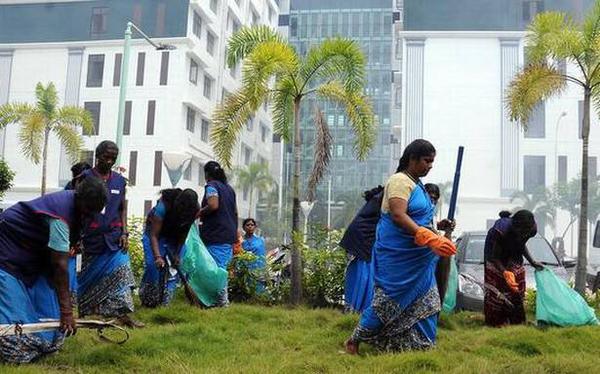 Seeing through the dengue fog

Pavithra Murali, 19, was admitted to a hospital on September 14 after she tested positive for dengue, and two days later, she was dead. When she first fell sick, her parents, both daily wage labourers, took her to a private clinic, where she tested negative for dengue. Later, her condition worsened and another test was taken at a private hospital, which threw up a positive result. She was shifted to a government hospital, where she died. When the family was issued the death certificate, it list 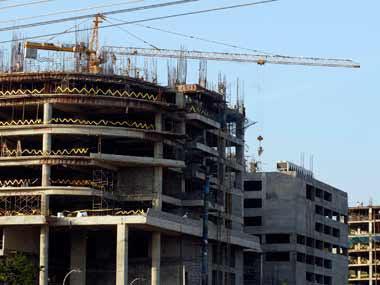 Editor's note: This is the last of the four-part deep dive into the murky world of land legislation in Tamil Nadu, unauthorised constructions and how corruption is rampant in the sector with no government wanting to curb it. Will the courts at least do the needful? In Pulicat, 56 km away from Chennai, an astounding transformation is taking place -- a resort with grand individual villas and at least two residential townships are to be constructed soon. The catch? It is at the lakefront of the Pu 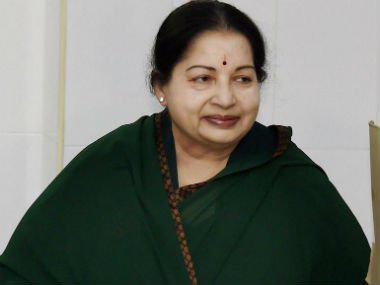 Editor's note: This is the third of a four-part deep dive into the murky world of land legislation in Tamil Nadu, unauthorised constructions and rampant corruption with no government wanting to curb it. Will the courts do the needful? In 2011, late chief minister J Jayalalithaa swept back to power after five years of the DMK (Dravida Munnetra Kazhagam) government. Her fierce comeback was highlighted by an innocuous government order. This order authorised the setting up of 36 Anti Land Grabbing
Load More Articles
Close ✕